Induced neurons: a model for mitochondrial aging in the brain? 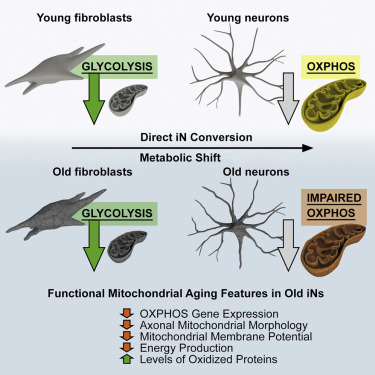 Mitochondria play central rols in the aging process. The macromolecular damage that occurs over the course of aging, including both frank mitochondrial mutation and insults elsewhere in the cell, impairs mitochondrial function. This, in turn, decreases the amount of energy the cell can generate by oxidative phosphorylation (ox-phos), and this steady deterioration of energy production is thought to underlie many diseases associated with aging.

The brain is particularly vulnerable to aging (q.v. the plethora of age-associated neurodegenerative disorders) and mitochondrial defects in particular. It’s not hard to imagine why: neurons and other brain cells are energy-intensive, accounting for some twenty percent of the body’s calorie burn, so we would expect attenuation of ox-phos to hit them particularly hard.

In terms of aging more generally, neurons are highly specialized cells with limited self-renewal capacity, and they are unable to avail themselves of certain kinds of cellular garbage disposal—for example, they can’t grow to dilute out detritus. Consequently, if their recycling pathways fall behind the rate at which the cell produces unwanted components (including, importantly in this regard, defective mitochondria), the trash will start to build up, further compromising function.

To better understand these phenomena, we would like to have a tractable cell-culture system in which to study neuronal aging. However, this is easier said than done: As we just noted, neurons don’t divide, so the researcher is more or less stuck with the first cells to hit the Petri dish. In any case, more people object to having their neurons removed from their skulls, even if it is for a good cause.

(Yes, I hear the squeaking in the back: we could use cultures [or slices or explants] of mouse neurons. However, as noted here recently, mice are imperfect models of human brain aging: for example, without massive genetic manipulation, they do not develop age-related dementia. Accordingly, it would be preferable to use human neurons, bringing us back to the objection raised in the previous paragraph, before I launched into this digressive but hopefully instructive parenthetical.)

Happily, we have ways of making neurons in vitro, starting not with brain tissue but with cells that most humans are far more willing to part with. For example, the humble fibroblast, a cell type present in almost every tissue (except, notably, the brain), can be induced to de-differentiate by the introduction of a surprisingly small number of factors (thank you, Shin Yamanaka). The resultant ‘induced pluripotent stem cells’ (iPSCs) can then be (re-)differentiated into a variety of cell types, including neurons.

Great news, right? Well, almost: inconveniently for our purposes, iPSCs “forget” most aspects of their former cellular state, including mitochondrial phenotypes and other markers of chronological age, making neurons derived from them unsuitable for studies of age-related change.

Fortunately, however, fibroblasts can be directly reprogrammed without having to pass through the tabula rasa state of iPSCs. The resultant ‘induced neurons’ (iNs) preserve information about aging, including age-associated transcriptional signatures and nucleocytoplasmic defects.

OK, back to mitochondria. One of the groups that pioneered the production and use of iNs has published a new study focusing on the mitochondrial phenotypes of these cells, specifically as they relate to aging.

The found that iNs created from fibroblasts from old donors had significant impairment in ox-phos, largely due to downregulation of the genes encoding components of the electron transport chain. Consequently, these cells were considerably less competent to produce energy, and they exhibited morphological hallmarks of age-associated neurodegeneration.

The authors argue that their findings support a bioenergetic explanation for neurons’ vulnerability to the ravages of aging. In other words, the metabolic shift that accompanied the conversion from fibroblasts to neurons causes the cells to be more dependent on ox-phos and therefore more susceptible to mitochondrial dysfunction.

Ultimately, these features make iNs from elderly donors a powerful tool for studying age-related decline in neuronal function, as well as the pathogenesis of neurodegenerative disease. A readily available source of cells that faithfully recapitulate the mitochondrial deterioration associated with normal human aging could enable high-throughput screens for drug leads that slow or even reverse these deleterious changes.

Somewhat more speculative, but still intriguing, is the idea that by comparing neurons derived from iPSCs (which “forget” the chronological age of the original cells, including mitochondrial defects) with iNs (which “remember”), we could obtain insight into the cellular tricks by which some cells can rejuvenate their own mitochondria, and thereby themselves.